New call for London’s drivers to turn engines off

The renewed call for action comes amidst emerging evidence that air pollution is linked to poor recovery and higher infection rates of COVID-19 due to damage caused to the lungs. 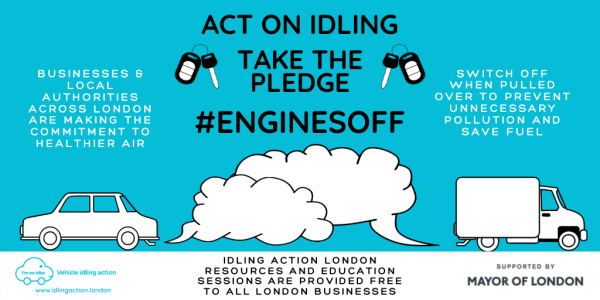 As part of the #EnginesOff pledge, Idling Action is offering London drivers free training and a providing a toolkit of resources to businesses, whose operations involve vehicle fleets, professional drivers, or employees who travel by car to work.

The group wants to arm companies with the knowledge of how best to reduce air pollution caused by vehicles to protect the health of drivers and the public.

“Through the Mayor’s Air Quality Fund, we have helped businesses to cut air pollution through Business Low Emission Neighbourhoods and other local schemes, reducing pollution, supporting cleaner vehicles and greener forms of transport. Encouraging businesses to take the #EnginesOff pledge will build on this.

“As London recovers from COVID-19, it’s vital that businesses and other drivers in the capital consider the health of others and take this a simple but vital step towards cutting air pollution.”

Idling Action has already been running air pollution anti-idling workshops with 40 schools, and speaking with 7,900 drivers to ask them to switch off their engines at regular idling action events throughout the 31 partner boroughs.

To find out more about the #EnginesOff Campaign and sign the pledge, as well as learn more about how the London boroughs are tackling air pollution click here.

About the Idling Action project

Vehicle Idling Action is a London-wide behaviour change campaign which is helping to reduce localised air pollution caused by motorists leaving their engines running when parked.

The project has been awarded funding as part of the Mayor’s Air Quality Fund Round 3 and involves 30 local authorities and City of London Corporation. As well as the delivery of idling action events, in which teams of volunteers, local authority officers and project staff work to educate both motorists and pedestrians, the project is also delivering school workshops, engaging with businesses, offering vehicle fleet training, and is working with all local authorities to ensure idling regulations are enforced across London.

The Idling Action Project has been running since 2016. Now in its fourth phase it is jointly led by the City of London Corporation and the London Borough of Camden. Keep up to date via Twitter.

The Mayor’s Air Quality Fund (MAQF) is a £22 million fund over 10 years to support projects by London boroughs to improve air quality. Projects supported with £6m in the third round of the MAQF were announced by the Mayor on 7 June 2019. In this round he is supporting four Low Emission Neighbourhoods and 11 other innovative air quality projects, including this idling project, a pan-London project tackling pollution from construction machinery, and an initiative supporting 250 car free and pedestrianisation schemes across London.