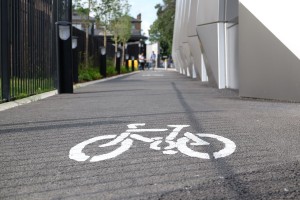 Cycle to Work Day is the nation’s biggest commuting event via bike which sees people and businesses up and down the country trade in their normal mode of transport for two wheels.

Launched in 2012, Cycle to Work Day celebrates the UK Government’s Cycle to Work scheme which started in 2011. Designed to save you money, it means you can spread the cost of a bike over tax-free instalments through your employer - adding to the list of reasons to get yourself a cycle! It’s reported that since the first large scale commuting event in 2012, over 2 million miles have been ridden.

This year’s Cycle to Work Day (8th August) followed the success of the Prudential Ride events over the weekend which drew thousands of Londoners out to enjoy the traffic free streets of the city. Among the crowds were participants from schools in Hounslow including Lampton Sixth Form and Isleworth and Syon who’s students were chuffed to receive their medals upon finishing.

Here at Hounslow Council, our new car-free building encourages cycling every day of the working week. With cycle parking for staff and the public, there is plenty of space to safely leave your bike. Ciarán from the Transport team (who is rarely spotted without his Brompton!) makes cycling a part of his daily commute to Hounslow House. For him, a folding bike has proven to be a great alternative to getting onto a packed bus after the Overground and means that “as cheesy as it sounds, cycling into work puts you in a good mood”. It just goes to show that you don’t have to commit to cycling all the way from home, there are plenty of benefits to be had from making it an element of a longer journey.

To celebrate Cycle to Work Day, Santander cycle hire scheme provided bikes free of charge with the code 'CTWD2019'. It provided the perfect opportunity for people without bikes to get involved and meant that those who couldn’t cycle to work in the city could at least ride part of the way home after work.

With the Mayor’s Transport Strategy aiming to get everyone doing 20 minutes of physical activity a day, commuting is the smartest way of achieving this consistently and without needing to find extra time in the evenings. As a cleaner, greener and more active option, cycling certainly is the way forward in a congested city. But if you're still hesitant about leaving your car behind for two wheels, Sustrans and Cycling UK have a multitude of articles with encouraging words of advice. There is also a handy journey planner available online to help map out the most suitable route for your commute. It allows you to differentiate between the quieter and faster options so you can switch it up and always try something new.

Be sure to check out related news at Cycle to Work Day and share your personal experience using the hashtag (#CycletoWorkDay) on social media.